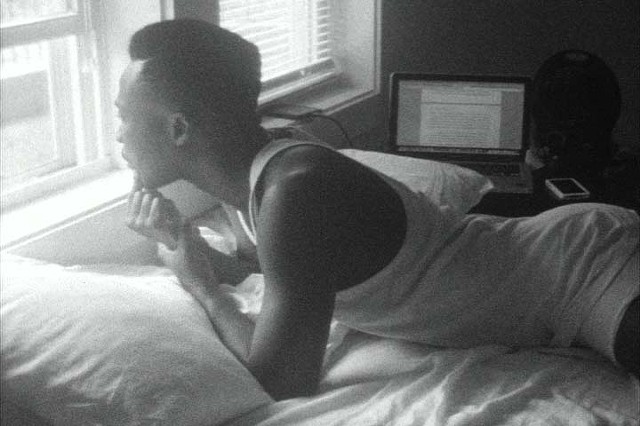 This epistolary short film invites us into the unsettling life of a young Ghanaian man struggling to reconcile his love for his mother with his love for same-sex desire amid the increased tensions incited by same-sex politics in Ghana. Focused on a letter that is ultimately filled with hesitation and uncertainty, Reluctantly Queer both disrobes and questions what it means to be queer for this man in this time and space.

Thematically, my films have been explorations in telling and retelling stories. Many of my films have been inspired by, personal stories or my own experiences related to my struggles with identity. Though my works have been personal to me, I think part of their appeal is that they are extremely relatable. With 'Reluctantly Queer' I am again retelling a story rooted in struggles with identity, though in this film I found inspiration in a story not my own but in one parallel to mine in many ways. 'Reluctantly Queer' is my collaboration with Kwame Edwin Otu based on his dissertation at the Carter G. Woodson Institute. The film chronicles his struggles with his identity as a queer Ghanaian man and the tensions that it brings with his mother.

His conflicts with identity were internal while mine were external; so our narratives parallel. I am also interested in taking advantage of the cultural privilege I have of communicating, on a public platform, issues that are considered taboo in many parts of the world. It's the privilege of telling these stories as an American and a Ghanaian; a privilege my Ghanaian parents gave me by immigrating to this country. I use my voice or my art to convey stories about the human experience and commonalities within our differences. - Akosua Adoma Owusu CAST & CREW